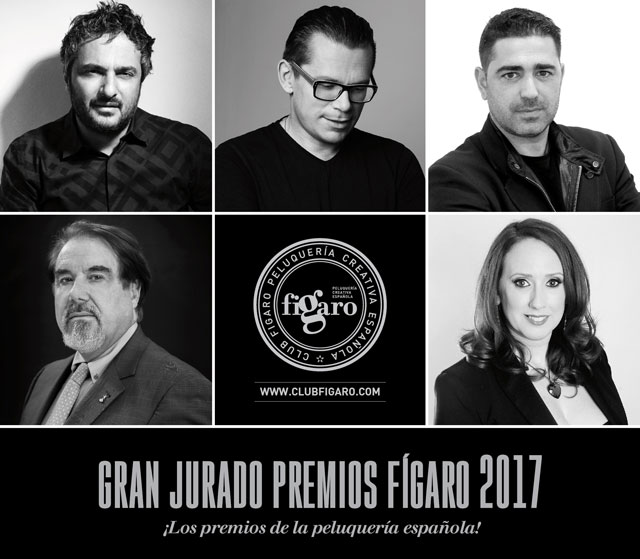 SPANISH HAIRDRESSING AWARDS’ machine goes at full speed again. After opening the entry stage, which ends 31st May, now Club Fígaro announces the five names that will make up the professional jury of Spanish Hairdressing Awards in their 8th edition. This year, the competition has a jury formed by five renowned public figures of Spanish and international hairdressing, who will judge the participating collections:

Angelo Seminara is one of the most renowned hairdresser in the world today. He worked hand to hand with Trevor Sorbie and has won four times the most coveted title in United Kingdom, British Hairdresser of the Year, a title that he currently holds. Also, Seminara has been awarded two times with the AIPP Grand Trophy and is Artistic Director for the italian brand Davines.

Christophe Gaillet is a well-known French hairdresser. In 2013 he won the Best International Stylist award in Toronto (Canadá) and in 2014 he was awarded with an AIPP Grand Trophy. Nowadays, he is ambassador of L’Oréal Professionnel France and has worked with several fashion designers.

Gonzalo Casanova is an Spanish hairdressing business owner. Currently he manages the school network Grupo C&C, which owns 36 hairdressing schools in Spain. Besides, he is the editor of Ediciones Planet Look, an specialised publisher that runs the haidressing magazine C&C Magazine and the website PlanetLook.com.

Luis Romero is a renowned Spanish hairdresser, president of the Romero business group, with seven salons in Zaragoza, and president of the association Intercoiffure España since 2010. He introduced the Pivot Point learning method in Spain and has a long path in education, imparting seminars and conferences, as long as working in the most important hairdressing associations in Spain.

Ruth Hunsley has worked in the hair industry for more than 21 years and is the editor of Hairdressers Journal International. She oversees the content and looks after the fashion pages for the magazine and website, choosing from the many international collections she receives every day.