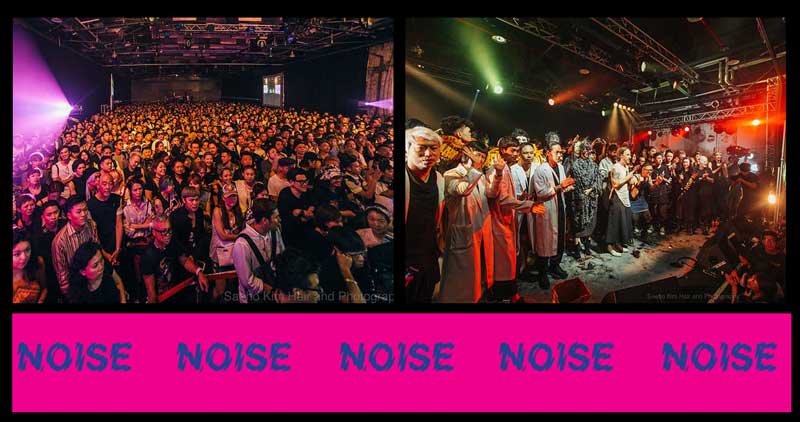 Making its debut in Taipei, NOISE recently took over the home of renowned music venue, Legacy Taipei. Six incredible teams joined the underground hairdressing event, showcasing their creativity to a packed crowd.
Compered by International Creative Director of SACO and founder of NOISE, Richard Ashforth said of the event: “Wow – what a night! It was our first time taking NOISE to Taipei and it couldn’t have been better, there was amazing work on display, and the audience was incredible!”

Took to the stage with an Anime themed collection of three boys with oversized, prosthetic eyes and incredible outfits.

Showcased an amazing three models, working cleverly so the team could evolve the hair on-stage. Using mechanics and inflatable hair the show was pure genius combined with amazing prosthetics.

Making a comment on social perception of body size, Peter Gray‘s show featured two very different looking models, one plus size and one size 0 who were wrapped in hair filled stockings then unwrapped on stage to reveal their differences.

Team Sshh kicked the evening off and showed work from their personal collections Togninni Salon and E-salon, coming together to produce a third breathtaking collection.

X-presion released their dark and directional POLLUTION collection to the audience, where three models were transformed on stage using pieces and masks to stunning effect.

The finale came from SACO where Richard and his team presented three sinister looking ‘beings’ who were cut onstage and transformed into crazed disco-dolls before the audience’s eyes.

Of the event, Richard said: “NOISE was created to share knowledge, passion and inspiration. It connects the viewer to the performer with more of a ‘pop up’ feel rather than a formally staged show, pushing the industry forward and taking creativity to a new level.”