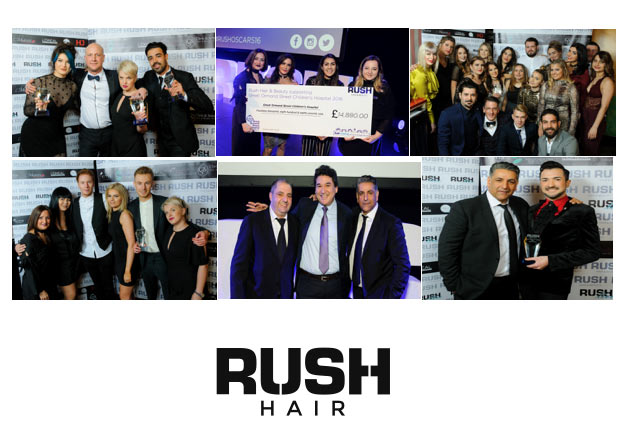 Celebrating another phenomenal year, with the opening of 11 new salons, including the most northern RUSH SALON in Manchester and the continual growth of the company both on a business level and creatively, the Rush Oscars once again provided the perfect way to get 2017 off to a flying start.

Held at the beautiful art deco Savoy Theatre and hosted by International Creative Director, Andy Heasman and International Colour Director, Chris Williams, who immediately introduced Co-Founder and CEO, Andy Phouli onto stage, who welcomed 2017 as a ‘new year, new direction and new venture.’ Andy went on to share Rush’s plans for building and developing the brand and how proud the Rush family is of the entire team.

LDC, part of Lloyds Banking Group, has come on board to help grow Rush into a major national brand.
The investment will help to accelerate Rush’s national expansion of the brand as the company plans to fast-track the roll out and almost double its salon count over the next four years.

Co-founder and CEO, Stell Andrew took to the stage to give a compassionate speech, calling 2016 the best year Rush have ever had and that for 2017, the team will step up to the challenge.
Rush hairdressers are full of passion and creativity, with one goal and one commitment.

Each year RUSH raise valuable funds for Great Ormond Street Hospital with their show, Rush Live. This year was no exception. Rush’s Tina Farey and Paola Pinto took to the stage to speak about how much Rush’s long-standing relationship with GOSH means to the company and presented GOSH with a cheque for £14,800 which was raised at Rush Live taking the total raised over seven years to £120,000.

Co-Founder Andy and CEO drew the evening to a close bringing on daughters Sophia and Georgia to present the final award for London Salon of the Year to Baker Street.