WELCOME TO THE BIGGEST SHOW IN
HAIRDRESSING HISTORY

OCTOBER THE 18TH – 4:30 PM – This event to be the most beautiful experience you have ever lived in hairdressing, 60 minutes of pure joy.

Tickets are available on:
HEAD-HACKERS.COM

ALL CONNECTED
ONE SOUL, ONE LOVE, ONE PASSION
CHANGE YOUR MINDSET
BE PART OF THE CHANGE !
LIVE AN IMMERSIVE EVENT INTO XPRESION’S UNIVERSE

For the first time all the industry, brands, hairdressers, medias…all together in a transformative event that will recharge the batteries of positivism through 60 minutes of hair, music, active meditations and pure joy.

Sally Brooks has been named Fellowship Hairdresser of the Year 2019 at a glittering lunch in London.

The Fellowship for British Hairdressing’s Luncheon & Awards was held at the Intercontinental Hotel on Park Lane and recognises the best of British hairdressers, who work tirelessly for the industry both creatively and in business.

Amongst a host of awards presented by President Ken Picton and Chancellor Ashleigh Hodges, was the ultimate accolade, Fellowship Hairdresser of the Year.

Sally, owner of Brooks & Brooks salon in Holborn, London, with Jamie Brooks, has won some 60 awards with her creative team including London Hairdresser of the Year three times and British Hairdresser of the Year 2017 and 2018. Sally collected her award to raptuous applause from the audience who included her friend and mentor, Trevor Sorbie.

“This is such a surprise but I’m delighted to be named Fellowship Hairdresser of the Year. It’s been an incredibly busy year which has included producing and directing my documentary, The Journey to My Destination. I have a lot of things planned for the industry in 2020 so watch this space!”

Australia’s Jacky Chan, from Oscar Oscar Chadstone in Melbourne, took home the first ever International Collection of the Year crown.

The stylist beat five other category finalists from around the world to triumph in the UK awards, dubbed the ‘Oscars’ of the hair world. Jacky claimed the inaugural title of best internationally produced collection, beating competition from countries as far apart as the USA, the United Arab Emirates and Canada.

The awards celebrate the stand-out styling stars across 18 categories in total, recognising achievement in both regional and specialist fields. For those lucky enough to win the same category on three separate occasions, a prestigious honour is bestowed; a place in the British Hairdressing Awards Hall of Fame. Once in the Hall of Fame, a hairdresser is no longer allowed to enter that category, having reached the very pinnacle of talent in that field.

About HJ’s British Hairdressing Awards, sponsored by Schwarzkopf Professional
For 34 years, the British Hairdressing Awards have been the most coveted and sought-after titles in the hairdressing industry resulting in global recognition. Both regional and category specific awards are given to salons and hairdressers across the UK who show incredible skill, vision and talent through a collection of images. Winners were announced at a celebrity hosted ceremony at the Grosvenor House Hotel, a J W Marriott Hotel in London’s prestigious Park Lane. 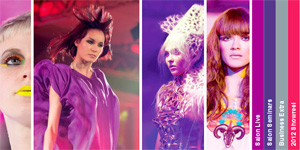 In just under six months, ExCeL London will become a hairdressing mecca, as Salon International 2013 embarks on a three-day extravaganza that will motivate and educate the global professional hairdressing audience it attracts each year. From the 12th – 14th October, Salon International will be bringing together brands from all over the world to showcase the latest techniques and trends in hairdressing.