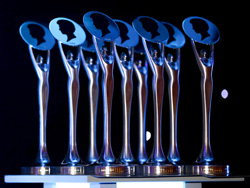 The hairdressing industry’s most revered awards have launched and the search is on for the creative and inspirational talents who will take the titles at HJ’s 2013 British Hairdressing Awards.

The Grosvenor House, a JW Marriott Hotel, will once again play host to the biggest event in the hairdressing calendar as the award ceremony acknowledges the country’s finest talents in various disciplines and regions.

Entries have to be received by 5pm on Friday 28th June 2013, with hairdressers shooting a collection of four images to submit for the first round judging. Judged anonymously with the results collated by a team of independent auditors, only the most qualified hairdressers are invited to judge the collections in the regional categories: Eastern, London, Midlands, North Eastern, North Western, Northern Ireland, Scottish, Southern, Wales & South West or the specialist categories; Afro, Artistic Team, Avant Garde, Men’s, Newcomer and Schwarzkopf Professional British Colour Technician.

Those who successfully make it as finalist will be asked to submit a further four images to create a collection of eight by 5pm on Friday 6th September with the winners being announced on Monday 25th November. This glamorous black tie event, hosted by a well known television personality will see the greatest names in British hairdressing come together to celebrate the best creative talents.